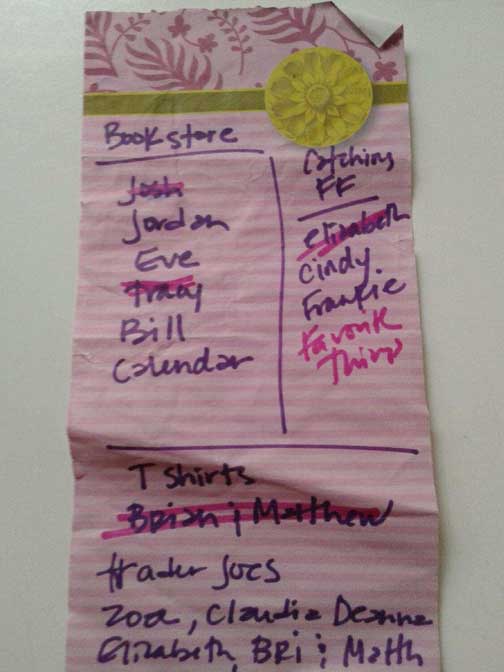 I found this list in the parking lot of a strip mall.  Looks as though it is sectioned off into retail destinations.  Under those subheadings are people’s names.  Shit – is this the list of a human trafficker?  What the hell do I do with this information?  Let’s hope this is a mere list of people for whom to buy things for.  I’d feel much better about myself if that’s the case….

Bookstore – I, personally, am a book lover – but I have learned that those who don’t love books really hate to get books at a gift.  Let us have a reflective moment for Josh and Tracy – since their names are crossed off, I’m assuming the writer of this list purchased books for them. May they be book lovers.  As for Jordan, Eve, and Bill – are they illiterate? Their names are not crossed off. Maybe they pissed off the writer somewhere between the parking lot and the check out at the book store.  Poor souls.  Then the word “calendar”. Not crossed off. They don’t give a shit about time, dates or 12 inspirational images.

Catching FF  - shorthand for fancy gift shop in town called Catching Fireflies – doo-dad’s and trinkets. Lots of gifts touting the message “Look who’s turning 40!!!” And mugs with cats on them. Most men’s worst nightmare.  Anyway, looks like Elizabeth was the only one who scored something.  Apparently Cindy isn’t over 40 and Frankie is a man.  Then there’s the line “favorite things”. If something is someone’s favorite thing, wouldn’t they already have that thing?  WTF

TShirts.  This seems to be the only part of the list that mattered to them since both Brian and Matthew are crossed off.  No destination for these.  Maybe just some knock-offs from the street corner and they didn’t want to leave a trace.  Yes.  I’m sticking with that.

Trader Joes.  Shit.  These people got screwed – everyone else has a gift-type shop as the retail site.  And these folks are left with a grocery store?  Well, it could be the wine.  Or that awesome marinated mozzarella chesse.  Well, matters not since they’re names aren’t crossed off.  None of them.  Zoa, Claudia, Deanne, Elizabeth, Bri and Matth – you will be forever remembered here at Rdiallog.

Synopsis: Although they made a list, they only finished a quarter of it.   Looks like they started off with lovely intentions of spreading some consumer love but fell apart.  Came to their senses? : “Do I really need to buy these peoples’ love?”. Or became jaded?: “Screw these people! Especially Matth! He’s so crappy I can’t finish writing his name!”.  Oh, but maybe that is his name?